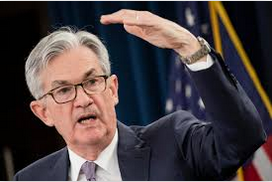 By Victor Adair5 November 2022No Comments

I’m a Macro tourist: I constantly monitor intra-market and inter-market relationships and correlations. It’s an old habit, and it often leaves me more perplexed than enlightened, but sometimes I find clues that help me see a trading opportunity.

I look at correlations as a trader, not an economist or statistician; in other words, I’m not very sophisticated. I assume that all markets are interconnected to some degree, but I notice that the “tightness” of those connections comes and goes and when I investigate “why is that happening,” I sometimes find a trading opportunity.

After years of trading, I intuitively understood that a trader in the S+P pit would constantly look over his shoulder to see what was happening in the currency, interest rate and commodity pits.

As Jim Rogers said when I interviewed him on the Moneytalks radio show many years ago, “Victor, how could you trade wheat in Chicago if you didn’t know what was happening to iron ore in China?”

In recent blogs, I’ve wondered if currency markets were already “pricing” a change in Fed policy and other markets would follow. The US Dollar had been “super strong” primarily, but not exclusively, because of Fed policy, and if the Fed’s tightening policy was going to “pause or pivot,” the USD would weaken.

The USDX made a 20-year high in September, up 29% from its “inflection point” on January 6, 2021, but recently it has started to look toppy on the daily charts and looks even more toppy after Friday’s big down day!

What’s the Fed going to do?

Despite the relentless messaging from the Fed that they will continue to tighten monetary policy in an attempt to “cool” inflation, analysts and traders keep looking for reasons why the Fed might change course.

One reason is that aggressive tightening will cause (if it hasn’t already) a recession. Another reason is that “something will break” if the Fed keeps tightening, and they will have to “do a 180” in response. Another thought is that if unemployment rises sharply, the Fed will have to “back off” even if inflation remains high. (This week’s employment data suggests that’s not going to happen anytime soon – and, yes, employment data is a lagging indicator, so markets will move before the UE rate starts rising.)

I thought the most likely reason for the Fed to signal a “pause” would be to assess the cumulative impact of their tightening to date, as they understand there is a “lag” between pushing interest rates higher and the effect that has on the economy.

In the initial press release following the Wednesday FOMC meeting, the market saw a hint that the Fed might “pause to assess.” The Dow rallied ~450 points in 30 minutes to a new 10-week high.

But in the following press conference, Powell declared that “it’s premature to think about pausing…we haven’t seen inflation coming down…we have a ways to go…and I would not want people to make the mistake of thinking we will change our policy soon.” The Dow plunged ~1,000 points over the next two hours and closed the day at its lows.

By Wednesday’s close, the general assessment seemed to be that the Fed would slow the pace of raising rates (December up 50 bps, not 75), but they would not stop anytime soon, and short rates would reach a higher level (above 5%) next year than previously expected.

On that assessment, stock and bond prices were lower Wednesday and Thursday, and the US Dollar rallied.

China moved the markets on Friday

The Shanghai share index plunged to a 2-year low two weeks ago when Xi Jinping secured a third term as President (the Chinese tech indices fell to a 6-year low). The Chinese stock indices began to bounce back this week and jumped higher early Friday (Thursday evening New York time) on rumours that ultra-tight Covid lockdowns would be lifted – China would be re-opening!

As the Chinese stock indices rallied early Friday, so did the RMB and most other currencies. Commodities caught a bid on the re-opening rumour, and the US Dollar tumbled against virtually all currencies right into the New York close.

The Canadian Dollar had a massive rally to a 6-week high as 1) the USD tumbled, 2) commodities soared, and 3) the stock market rallied. The much more robust than-expected October employment report also helped the CAD, and the CAD registered a Key Reversal Up on the weekly chart.

The Australian Dollar (apparently) had its biggest 1-day rally in over ten years as people got excited about China re-opening (and buying Aussy exports!)

Copper and other base metals soared on the thought China might be buying again. Copper closed at a 4-month high and had a Key Reversal Up on the weekly chart.

Gold has been trending lower (down ~ $460 or 22%) since the spike to All-Time Highs on the Russian invasion. Buyers have ignored the futures market (managed money was net short), and the gold ETF market has been net sellers for months. The chart had been developing a triple-bottom pattern (triple bottoms never hold), so the ~$70 rally off Thursday’s lows was impressive! Silver rallied >$2 from Thursday’s lows. Gold had a Key Reversal Up on the weekly chart.

The weak US Dollar on Friday may have contributed to the rally in North American equities and short-dated Treasuries, and/or the market may have “digested” the Fed’s new level of “determination” and has resumed the rally that began on October 13. On Saturday, Chinese official news reports denied the rumours that covid lockdowns would be lifted.

The US mid-terms are on Tuesday, and the October CPI report is due Thursday.

The COP27 starts this weekend in Egypt and runs until November 18.

UK Prime Minister Sunak, who cancelled Liz Truss’s re-opening of fracking in the UK as soon as he became PM, had initially claimed that as much as COP27 was important, he had more important issues to deal with at home – and would have to give COP27 a miss. He’s now changed his mind and will attend the conference, leaving things in the UK to sort themselves out, saying that COP27 was too vital for him to miss. I wonder if my British readers will be good-humoured about their new PM’s priorities.

The recent short-term volatility across markets has been brutal; it seems like 500+ point daily swings in the Dow are routine. I continue to trade small sizes with tight stops.

I felt out-of-sync with markets the past two weeks and did not trade Monday and Tuesday. I shorted the S+P ahead of the Fed press release (thinking the market had rallied too much on hopes that the Fed would signal a policy change.) I was stopped on the initial rally, but I re-shorted the S+P just off the day’s highs – it seemed like the rally had petered out too quickly, given that the Fed had signalled a slowdown in the pace of interest rate increases. I stayed short while the stock indices tumbled on Powell’s press conference remarks and covered the position for >100 points in the overnight market.

I started buying the S+P on Thursday, looking for a resumption of the rally that began on October 13. I had some small profits and losses and was out before the sell-off into the close. I missed the overnight rally but started buying again after the market tumbled Friday morning on the (supposedly strong) UE report. I stayed long the S+P into the weekend, looking for a continuation of the rally from the mid-October lows.

I bought OTM T-Note calls on Thursday and held that position into the weekend. I’m bottom picking the bond market, but my timing is vague, so I bought calls instead of futures. I’ll suffer some time decay in exchange for positive convexity!

I missed the currency rally. I was out for a birthday dinner with my wife Thursday evening when the currency rally started, and given that I have a (weakly enforced)) rule to NOT trade after I’ve been drinking, I did nothing when we got home, and by 5 am Friday, when I sat down at my desk, the currencies had rallied too far for me to chase.

Quote of the day

I’m not the least bit surprised. Pension funds (generally) embraced ESG – it was the politically correct thing to do, and on any realistic mark-to-market basis, they’re not making money for their clients this year!

A Memory from my Trader’s Notebook

In 1980 I conducted an evening seminar on “How to trade financial futures” in the boardroom of the ContiCommodities Vancouver office. There were 10 – 12 people around the table.

Near the end of the seminar, one of the people asked this question: “Victor, this is all very interesting but what I really want to know is how can I stay ahead of inflation?”

My spur-of-the-moment, straight-from-the-heart answer: “Put together a string of profitable trades.”

One year ago this week, Barney came to live with us as an eight-week-old puppy. I’d never had a pet before and had no idea what I was getting into! It has been a steep learning curve for me, but Barney took it all in stride. He weighed 62 pounds this morning, a new high, and 50 pounds more than he weighed when he arrived here. He’s sleeping on the floor beside me now, waiting for me to finish the Notes so we can go out for another walk.

I’ve had a regular weekly spot on Mike Campbell’s extremely popular Moneytalks show for >22 years. The November 5 podcast, with my friend Kevin Muir – the Macrotourist as Mike’s special guest, is at: https://mikesmoneytalks.ca.