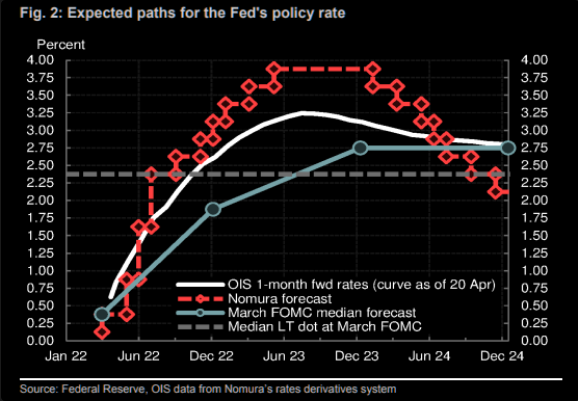 By Victor Adair23 April 2022No Comments

Stock indices finally got the message from the credit markets, and they didn’t like it!

Interest rates across the curve have been surging higher since December, with the “rate of change” accelerating since early March, but the leading stock indices remained no more than a few percentage points away from All-Time Highs.

Late this week, with Fed officials and analysts talking about bigger and bigger rate hikes, the alarm bell finally rang, and the Dow dropped >1,700 points from Thursday’s high to Friday’s low – creating a bearish Weekly Key Reversal on the chart.

Perhaps some fund managers expect that Fed tightening will be “transitory” because sharply higher interest rates will precipitate a recession, and the Fed will quickly “back off.” We’ve seen rotation inside the stock market from growth to defensive sectors, but this week even the defensive sectors got hit.

The bond that didn’t bounce

Late this week, after a brutal four-month decline, bonds couldn’t even sustain a “bounce” while the stock market was getting hammered. Negative sentiment is extreme in the bond market.

The USDX had its highest weekly close (except for one week during the Covid Panic) in five years this week. I keep repeating, “Capital comes to America for safety and opportunity.”

The Yen reversed from an uptrend to a downtrend in early January last year (in my blog early last year, I often referred to the US Dollar “inflection point” that occurred when the US Capitol Building was stormed on January 6, 2021.) The Yen has fallen ~20% against the USD since January 2021; and has dropped 10% in the last seven weeks. It is now at a 20-year low Vs. the USD.

Inflation in Japan has been benign (relative to many other countries), and the BOJ is determined to keep bond yields from rising. They have created trillions of new Yen to fund their unlimited buying of Japanese bonds, and this increase in the “supply” of Yen, together with ever-widening spreads against American yields, has killed the Yen.

The dramatic plunge in the Yen’s value has (dramatically) increased import costs, which will feed through to higher Japanese inflation levels.

From a trader’s perspective, the whole world is short Yen. Shorting Japanese bonds has been a “widow-maker” trade for the past two decades. BUT – if the pain of a tumbling Yen and sharply rising domestic inflation motivates the BOJ to finally allow bond yields to increase, then the Yen could soar. (BTW: gold is at an ATH in Yen terms.)

The Chinese (Offshore) Renminbi had its biggest weekly tumble against the USD since the Covid Panic. (This chart shows how many RMB are needed to buy one US Dollar – rising prices mean the RMB is falling.)

The EURUSD closed at its lowest level this week since the Covid panic, down ~12% from the January 2021 inflection point. The ECB remains reluctant to raise interest rates, there is a French election this Sunday, and the war in Ukraine continues.

The Canadian Dollar briefly rallied above 80 cents on a stronger-than-expected CPI report on Wednesday (another reason for the BoC to remain hawkish) but reversed sharply Thursday/Friday as the overall market tone went distinctly “risk-off.” The CADUSD has closed lower each of the past four weeks, with a bearish Weekly Key Reversal this week.

The Toronto Stock Index has been one of the strongest in the world YTD (perhaps investors saw it as a play on commodities) but was battered Thursday/Friday.

A surging US Dollar and sharply higher interest rates are usually kryptonite for the gold market. The Gold Miners ETF and the Junior Gold Miners ETF made new multi-month highs Monday but closed on their lows Friday, generating Weekly Key Reversals on the chart.

Martin Murenbeeld has been writing the Gold Monitor for >40 years. His clients are the “who’s who” of global gold producers and institutional investors. His short-term gold pricing models (which depend very much upon the USD and the TIPS yield) suggest that the Ukraine “war premium” may be $300. His longer-term models indicate that gold is fairly priced at ~$1950.

Corn traded above $8 for only the 2nd time in history

Grains and oilseeds have been rallying along with other commodities since the 20-year lows made during the Covid Panic. Their rally was super-charged by the Russian invasion of Ukraine and subsequent Malthusian stories of widespread starvation.

Energy shares have been the hottest stock market sector YTD

The stock market rout was so bad Thursday/Friday that even the energy sector fell.

WTI crude oil spiked to $130 when Russia was hit with sanctions but quickly fell back to trade around $100 despite a powerful bullish narrative for future prices. I’ve been skeptical about the idea that the flow of oil from Russia will be reduced to a trickle. Read The King Of Oil about Marc Rich, and you might agree with me that oil “finds a way” to get to markets. (This WSJ story describes one way Russian oil is now finding a way to world markets.)

Nat Gas looks like another market that took a speculative run on a bullish narrative but then stumbled hard when genuine sellers showed up.

I made money early in the week with long positions in S+P, T-Notes and Yen. I couldn’t get turned around fast enough to short the stock market Thursday/Friday, so I missed that huge move. On Thursday, I shorted CAD above 80 cents and covered it a few hours later for a 45-point gain. (If I had stayed with the trade, the CAD fell another 100 points Friday!) I gave back some of my early week profits by buying T-Notes and Yen on Friday, looking for a bounce as stocks tumbled, but that didn’t happen, so I closed the positions for small losses to go into the weekend flat. My P+L was up ~ 1.5% on the week.

How much is already in the price?

In the Quotes section of my April 2nd blog, I quoted my friend Kevin Muir (The Macrotourist) saying, “Sometimes the most difficult part of investing is not figuring out what will occur, but what’s already priced in!”

So now what? I’m always looking for market opportunities like the one Jim described where something is NOT priced in or where something is “more than fully” priced in. I love to look for reversals, especially when a pervasive and convincing narrative has been wholeheartedly embraced!

A lot of “inflation is surging higher, and the Central Banks will raise interest rates quickly to cool inflation before it gets out of control” is already priced into markets – especially bond yields and exchange rates.

Bond yields and the USD may continue to trend higher; they may have a modest, short-lived correction and be much higher a few months from now. I don’t know, but I’ll be watching for reversals for my short-term trading. (My long-time friend Ross Clark has done terrific technical analysis for decades, and he currently sees daily and weekly capitulations in the bond market.)

I won’t buy a market just because I think it has gone down too far too fast. I need to see some signs of a turn first. I bought both T-Notes and Yen early this week when they started to bounce, but I took profits quickly when the bounce ran out of steam. I’ll be looking for opportunities to buy T-Notes and Yen next week.

“No government in the world has enough money to be able to affect the transition we need to affect, to move us much more rapidly into sustainable energy postures in our nations. Europe is probably the lead on the planet in terms of the efforts it’s making.”

“Europe has had no choice but to understand they’ve got to move off of Russian fossil fuels as fast as they possibly can, and to their credit, they’ve really taken the initiative to double down on their deployment of renewables.“

My comment: John Kerry represents the ideals of Biden’s Green New Deal. I believe he is willfully blind to the importance of fossil fuels as THE critical energy source for the world right now and for the foreseeable future.

I invite you to take ten minutes to read the latest article by Doomberg, which examines a proposed megaproject to build sun and wind farms in North Africa, store electricity in mega batteries, and transmit consistent baseload power via undersea cables 3,800 kilometres to the UK.

The article concludes that the proposed project demonstrates the huge “gap” between “renewables” and fossil fuels to deliver a reliable and consistent energy supply.

We live on Vancouver Island off the West Coast of Canada. Barney loves to explore the Rain Forest; I go with him to make sure he finds his way home.

Barney cleans up quite nicely when he comes home from exploring the forest. Here he is with his Pretty Boy look:

I’ve had a regular weekly spot on Mike Campbell’s extremely popular Moneytalks show for 20 years. The April 23 podcast is available at: https://mikesmoneytalks.ca. 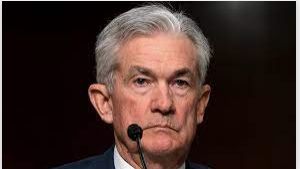