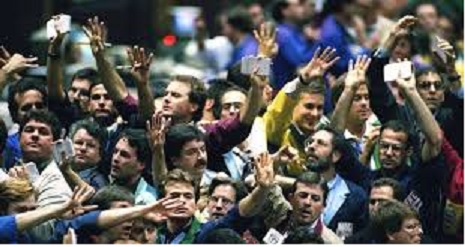 By Victor Adair29 October 2020No Comments

You can never have enough on when you’re right.

I just closed out some “risk off” positions (short stocks, Euro and gold) that I’ve had on for most of the past 2 weeks. I caught some good moves, especially short stocks, and I decided it was time to take profits. It was one of my better 2 week periods of the year…in terms of my P+L…but it wasn’t very exciting…actually it felt pretty “routine.” I saw what looked like good trade setups, I put on some trades, put protective stops in the market, lowered the stops as the markets dropped and eventually cancelled the stops and covered my shorts at the market. A pretty routine process.

The whole process would have been a LOT more exciting if I’d been trading HUGE size…but I wasn’t.

I remember visiting the Chicago floors back in the 1970’s / 1980’s. I must have been there 100 times and it was always a HUGE BUZZ. I’d be dressed in a business suit while everybody else was wearing trading jackets…so I stood out like a sore thumb and I “just absolutely knew” that everybody thought I was a pigeon.

The floor could be relatively quiet and then suddenly “ERUPT” with hundreds of people screaming and frantically waving their arms…desperately trying to get a trade done.

In 1983/4 when I was the global currency analyst at Conti I would give a breathless 5 minute currency report over the “hoot and holler” private phone system that connected all of our North American and European offices and then use the same phone system to place orders for my own account…knowing that 500 brokers could hear me entering my orders.

I ran my account from 10 Grand to 30 Grand that year…using WAY more leverage than I would ever dream of using today…but as the boys on the floor used to say, “You can never have enough on when you’re right!”

I wrote a piece under the Trading Principles headline the other day about finding a way to trade that suits you. Finding your way has many parts but one of the most important things you have to find is what suits you in terms of sizing. My friend Peter Brandt (http://Peterlbrandt.com) says that if you’re willing to lose more than 5% of your trading capital on any one trade then sooner or later you’ll go broke. He generally limits his losses on any one trade to less than 1% of his trading capital.

I size my trades these days so that if they’re a loss it doesn’t matter and if they’re a winner that’s nice…not fantastic…not life altering…just nice…and then I move on to the next trade. A trade is just a trade.

I know I’m going to increase my sizing one of these days…just to crank it up a bit..but I’ll need to feel real solid about my process before I do that. I’m not trying to prove anything to anybody. I’m just a guy trying to do a good job, knowing that more than half my trades are probably going to lose money.